Lets go back to 2012, freshman year. A friend of mine nicknamed me ‘Mona’ whom he describes as my alter ego. Coincidentally, at that time, I was also thinking of creating a Twitter account and  what handle I could use. I had so many options. Long story short, I came up with ‘Afro Mona’, because I was obsessed with Afros. I was convinced that if I ever got a tattoo, it would be of an afro, #ErykahBaduNewAmerykah cover. I always wanted to have natural hair since High School, but I didn’t have much control of my hair because my parents thought it would be too much admin to look after it and cutting it wasn’t an option.

Throughout University, I was very confused about how to deal with my hair. Despite my desire to be natural, there were a few times I didn’t relax my hair. I would just leave it without relaxing for months but I was utterly clueless about managing two textures. I didn’t know anything about transitioning. So my hair would break and at some point, I would end up relaxing it again especially when I went back home for the holiday. My parents would question the frightful state of my hair. But I still wanted to transition.

Another reason why I wanted to go natural was because I have a very sensitive scalp. Every time I would relax my hair it would burn my scalp just a few minutes in before it started to process. It was so bad that even the kids relaxer line would still burn.

Two siblings in my High School had natural hair. They had successfully transitioned from relaxed hair and had such long natural hair. In 2015, I didn’t relax my hair, and I started washing my hair at home but still had no idea about what I was doing. It was still breaking. Even though I wanted natural hair, I wasn’t ready to give up the length because my hair was long. The last time I relaxed my hair was January 2016. As time progressed, I started planning on how to go natural. June that year, I planned to transition but my trip to the salon to trim the relaxed hair quickly turned to my hair being critiqued by my hairdresser, who pointed out that my relaxed hair was all damaged. Hence, I reconsidered my decision. I realized that I couldn’t be worrying about length because my hair was eventually all going to break regardless. That is when I did the big chop, but I wasn’t ready to wear it out and wore a weave instead.

Long story short, I came up with ‘Afro Mona’, because I was obsessed with Afros. I was convinced that if I ever got a tattoo, it would be of an afro, #ErykahBaduNewAmerykah cover.

Prior to the big chop decision, I was watching so many natural hair videos but I never actually went natural. August 2016, was when I had my natural hair out for the first time during a lunch outing since my big chop. It was such a struggle because I still din’t know what to do. I wasn’t used to it. The extent of my denial was immense. Life was easier with relaxed hair. I would use rods to give a curl effect, then comb it out to get an illusion of an afro. The obsession was real! With the new natural hair journey, I started by using products with natural ingredients. I would do protein treatments with avocado, a hint of conditioner and it was working really well. My hair was a lot better compared to now. I could sleek down my edges easier and my hair was more elastic, coiled but din’t have that much shrinkage. But now, I comb it out and a few minutes later its shrinking. It must be the change in my hair regimen.

In December 2016 during my trip to Uganda. The plan was to braid my hair, so I din’t take my hair products to wash it. I ended up not braiding and the next day was Christmas, so I set out to get some products; Shea moisture, raw Shea butter conditioner and shampoo and WOW! I don’t know if it is a good or bad wow. I feel like it changed my texture after I started using the latter. I tried to use the tea tree oil shampoo and conditioner that I had started with prior to the new products, and my hair would feel very dry. This was very weird because when I tried using that before Shea moisture, my hair wouldn’t become dry. I don’t know, but that’s my theory. But after a few months, it grew because I was using my castor oil and yey! Hair growth and more high puffs, the only style I knew.

I kept doing high puffs, but what I din’t see in the videos is what happens when you frequently hold the latter using a rubber hair band, it breaks your edges and I din’t know that. I only found out after it already broke my edges when I saw a video. In January 2017, I was looking in the mirror and exclaimed in dismay over where my edges had gone. I had them in December! It was so depressing because I had worked really hard to take care of my edges and now I had this.

Transitioning 2018-one of my go to styles

This is my hair journey in a nutshell. I have stopped doing high puffs frequently because  I now know it breaks the edges. I still watch videos on specific topics, it is just something I do whenever I am trying to figure out a hair mystery. My story is not to discredit the products mentioned above. Our hair responds differently to products. What works for me might not work for you and vice versa, because I have a couple of friends who you will see within this series whose hair has flourished using the products that din’t work for me. Watch how your hair responds to different products and act accordingly.

Daphene is a senior accountant at KPMG, South Africa. She has a huge passion for entrepreneurship, photography and fashion. She uses her free time to develop her skill in photography and learn new camera tricks. 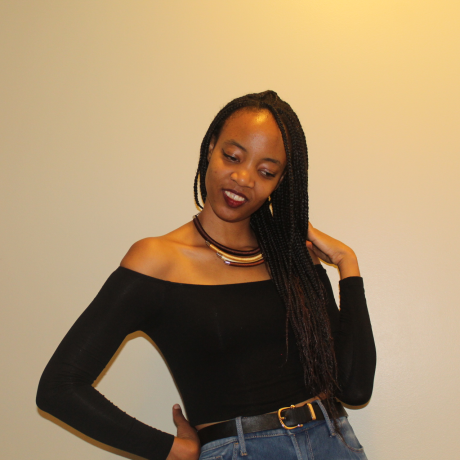 A Natural Hair Enthusiast reminding you that you are marked by flawless craftsmanship. Your hair doesn’t need fixing, society’s view of your hair is what’s skewed.
XoXo,